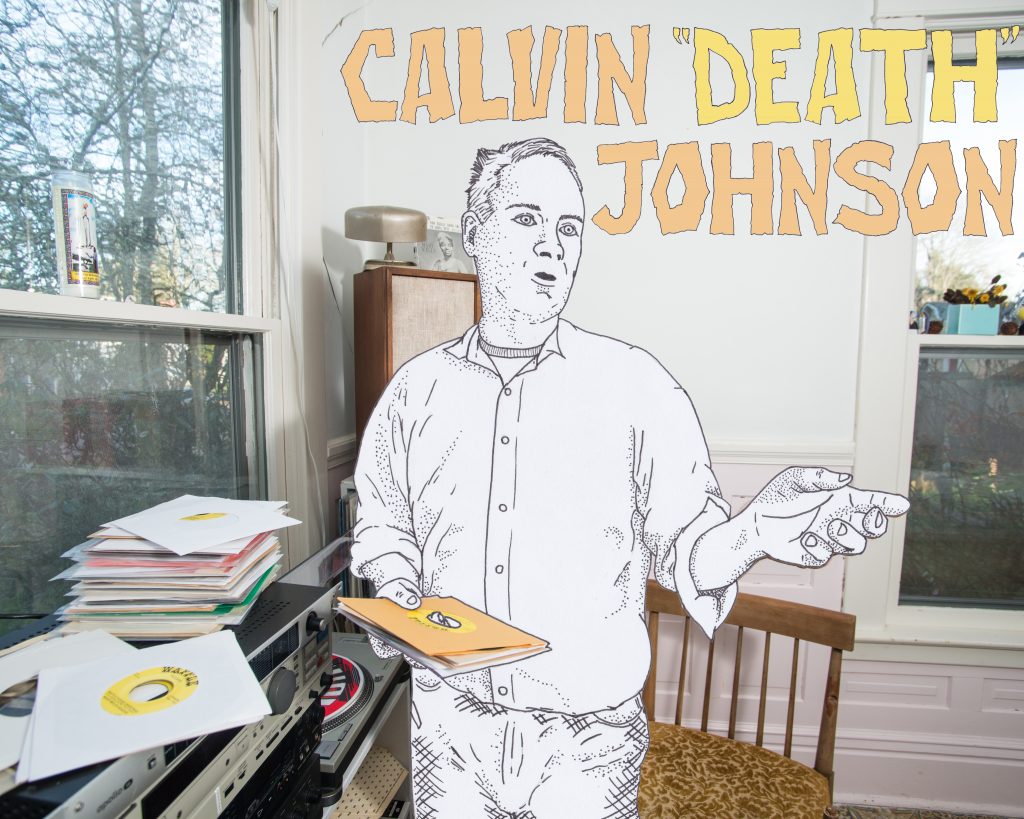 Sarah and I both think of Calvin now as our ex-employer; we contributed our years in the trenches of rust and toil that were working at K, Calvin’s record label. But before that, we were both fans. Calvin sings in a growling baritone that is equally tender and morose. We listened exhaustively to records by Beat Happening, The Halo Benders, and Dub Narcotic Sound System, all released by K. Calvin is a manifestation of his creativity: he is stuck in his ways, and endlessly passionate, but only about the things that he grants entrance into his life. Hopefully, in highlighting a couple of his collections (he seems to have many), we have allowed some of that passion to seep out into the world. He is a character who is always on-stage, always performing, always reciting a line or two that he’s gotten cues for from off in the wings, someone whispering somewhere, a memory. We did our interview with him following a photo-shoot to promote the album that he’s currently working on; during the shoot he stretched a muscle in his neck too far. He put his hands on his head, in pain. “It’s like an ice cream headache,” he said. To the rest of us, it is a brain freeze. But to Calvin, it is an ice cream headache. A teddy bear with real teeth and claws. See what Calvin is up to by visiting the K website, or do your true duty of fandom and buy the synagogue with the bright blue roof that was the site of the K office for the past decade-plus (where we spent our years of service). You can turn it into a pork restaurant or something. 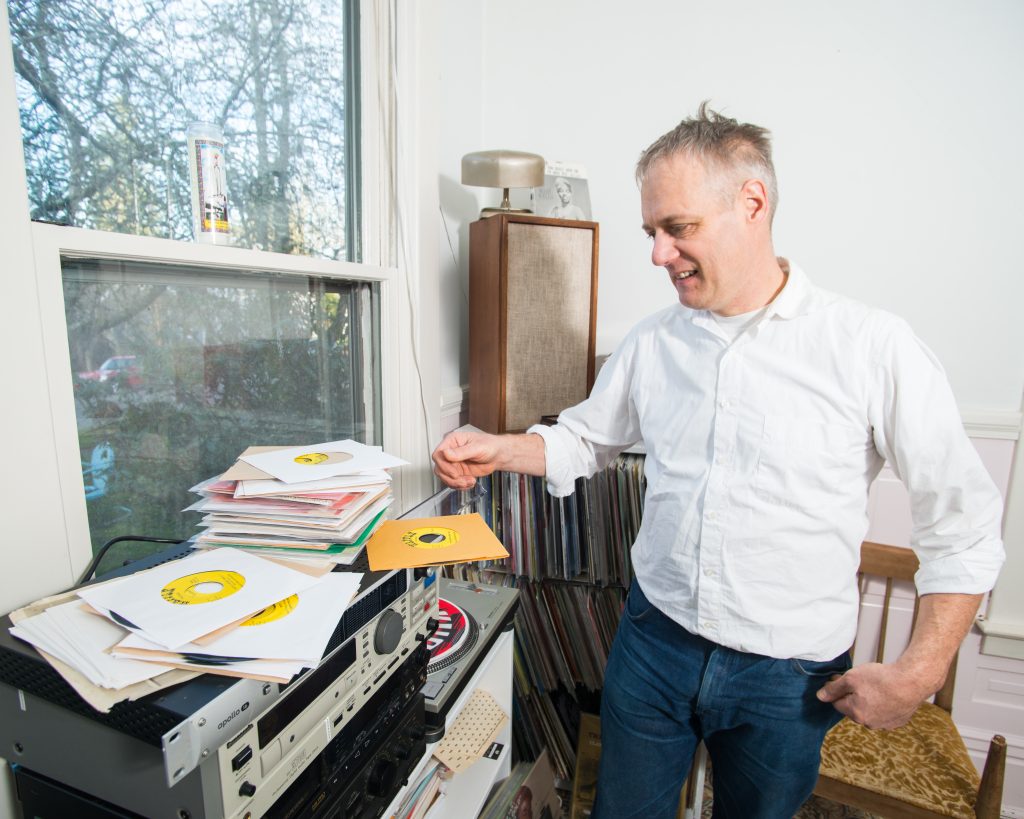 Calvin, in his own words: So I got a couple of collections for you. Here are the guitar picks. And then this is another collection that I have that we can talk about. You had said you were interested in collections, and that I have a record collection. Well, this is a collection of records that I have accumulated. These are on a label called Waffle. There’s a restaurant chain—it’s a chain, but not like a bad chain, it’s one of the good chains. It’s called Waffle House. And they just serve breakfast. And stuff. But in the corner they have a jukebox. You know how jukeboxes have rows of lists of records? They have one row that’s just songs about Waffle House. And these are records that are from those jukeboxes; songs about Waffle House. Of course, now they don’t have 45s in them. They had 45 jukeboxes so late, way past everyone else getting rid of theirs. But they finally got rid of them. So when you go to Waffle House now they have the jukebox and the have the Waffle songs, but they’re not on 45s. They have different songs now. What’s cool about it is, they have different styles. So there’s like, some that are country, some that are R&B, some that are, like, oldies rock ’n’ roll, so there’s all these different styles of Waffle House songs. 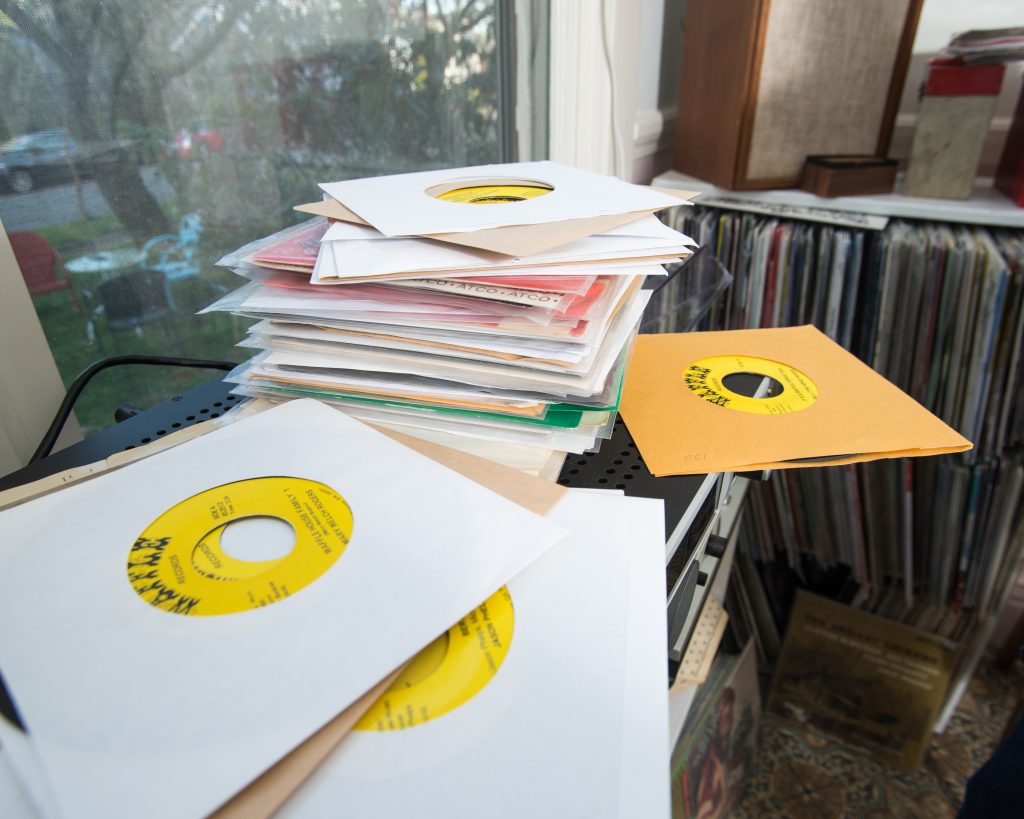 Here’s one, this is good: “Why Would You Eat Your Grits Anyplace Else” Now, what I like about this grits one is they’re starting to re-do the Waffle House, so now they’re changing the logo—it’s just like how Kentucky Fried Chicken is now just KFC, and it’s not Kentucky Fried Chicken—Waffle House is now WH. Totally annoying. And when you go there you can still get grits. But they’re not on the menu. You have to ask for them. So, why would you eat grits anyplace else? Because it’s not on the fucking menu! That’s why! 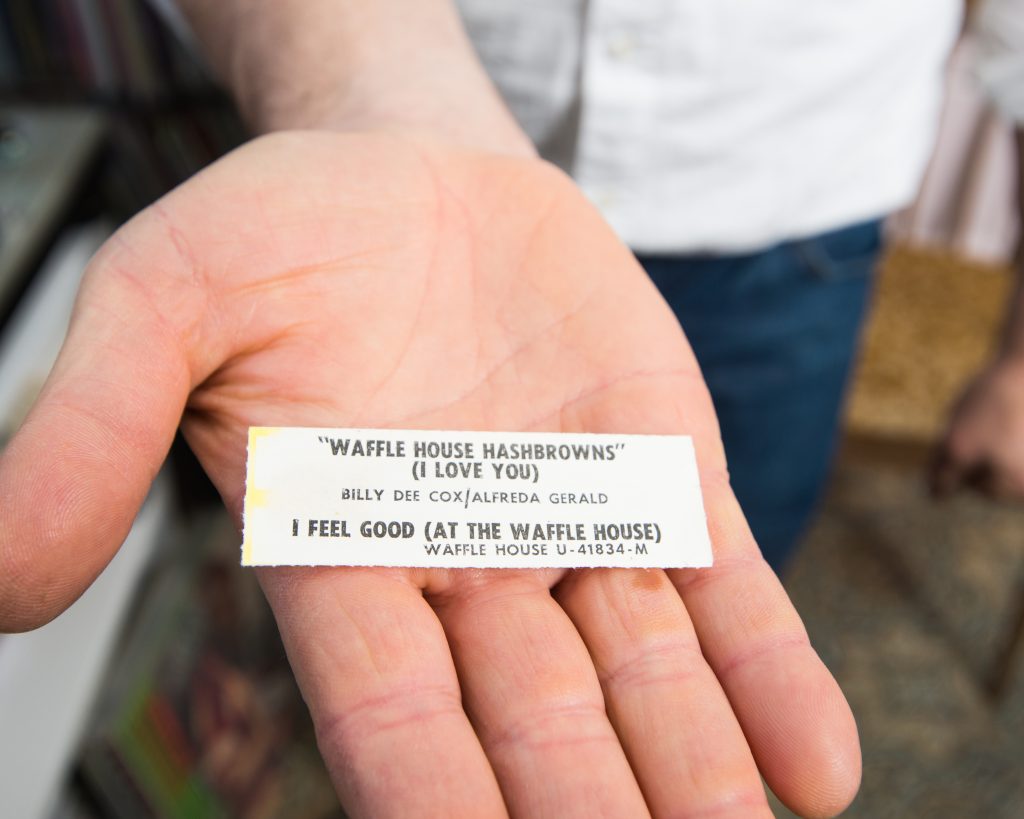 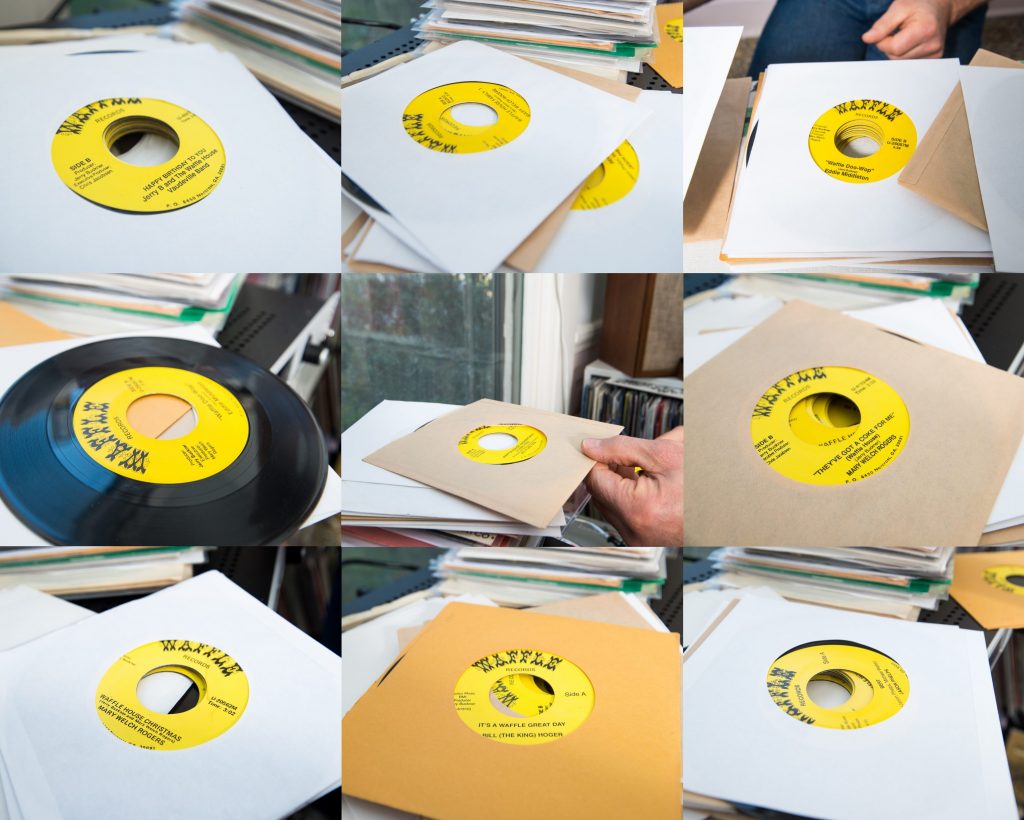 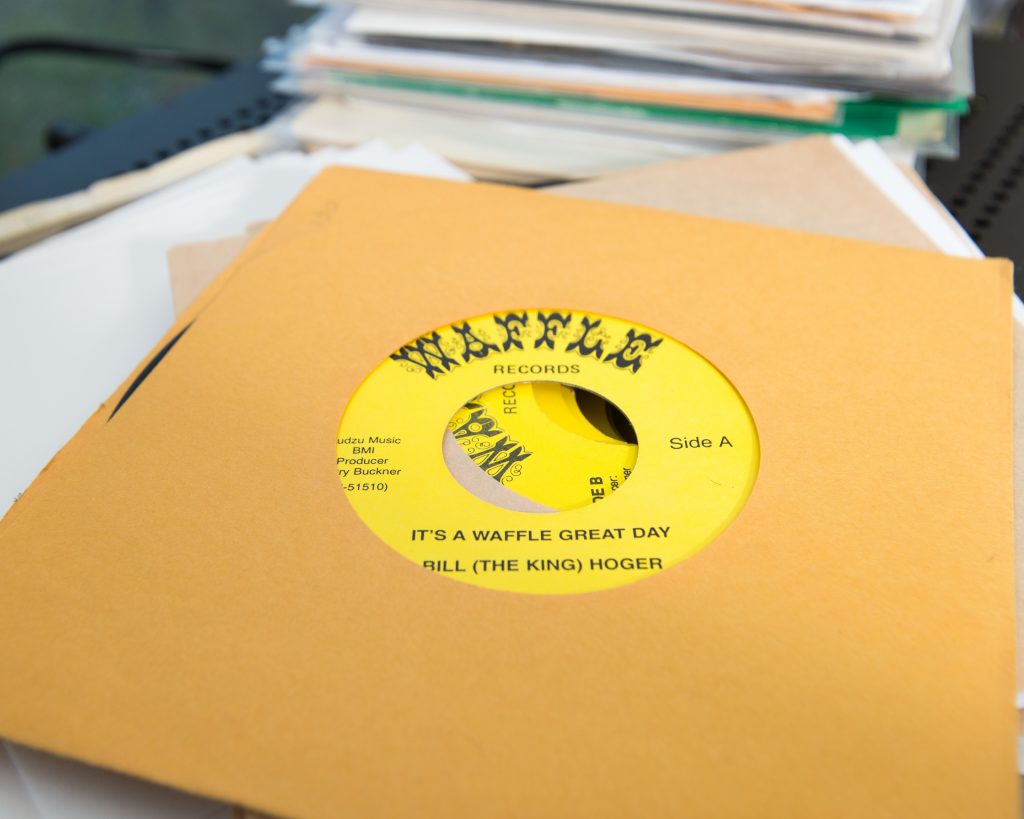 I still go whenever I’m on tour. They don’t have any here in Washington. But, um, they have them as close as New Mexico. I used to live in Maryland. And there used to be one in D.C., right on Wisconsin Avenue. It’s not there anymore. But right across the street from the Sears store on Wisconsin, there was a Waffle House. That’s the first Waffle House I remember ever seeing. And I was like, “Cool! A place that just serves waffles?” It was cool how small it was; it was basically just a counter. It was a small one. So I was like, this place is great. 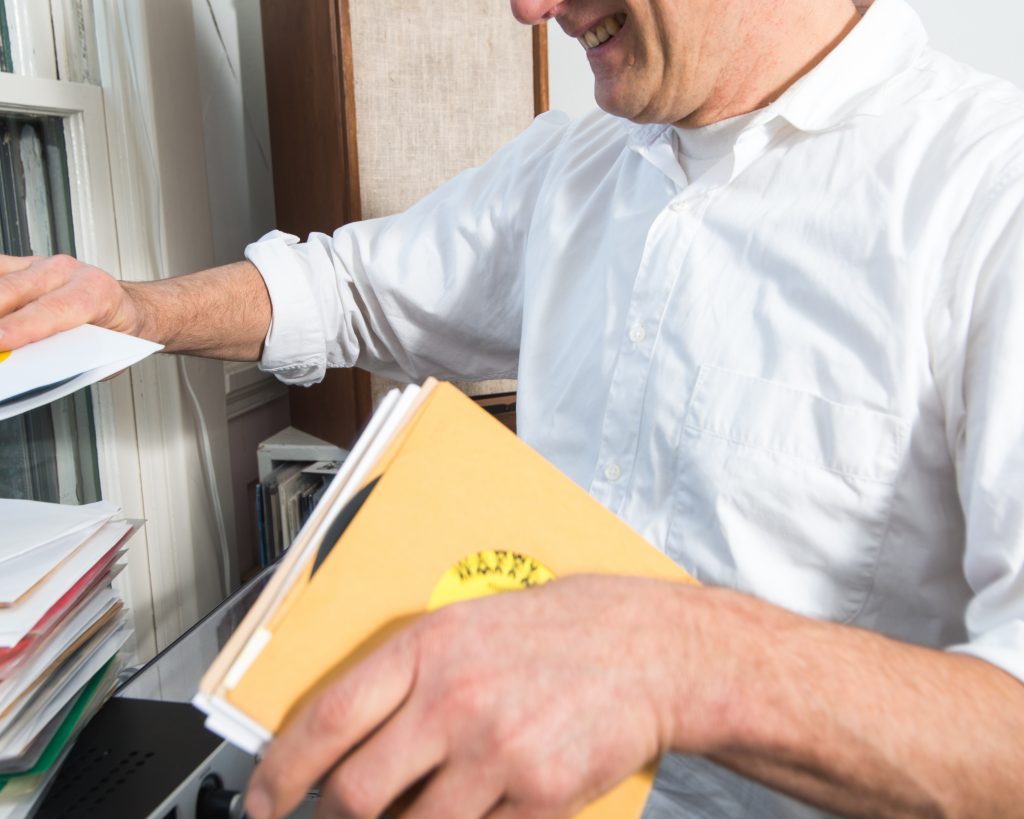 I used to [play these on the jukebox]. And, you know, one time, um, I was there—because, when you work at a restaurant and there’s a jukebox, you know every song. I remember there used to be this restaurant chain in Portland called Macheezmo Mouse, it was like healthy Mexican food, and they had a jukebox that was free and it had really cool songs on it, so I would go there and play the songs and one of the people who worked there was like, “God, I am so sick of this song.” But, um, I remember one time I put on some Waffle House songs at the jukebox and one of the waitresses turned to the other and said, “What song is this?” And the other goes, “I dunno. Oh, it must be one of those Waffle House songs.” Like, “No one ever plays those songs, and since we don’t know this song by heart it must be one of those songs.” That was kinda the logic that was going on there. 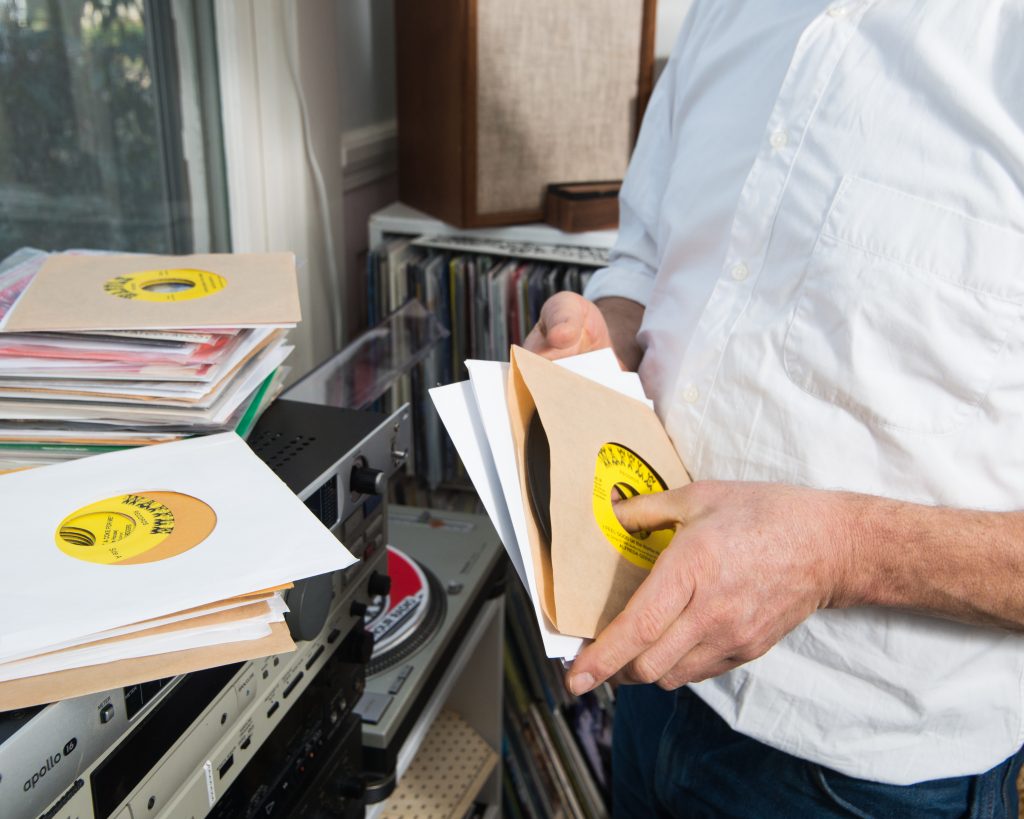 This is good: “Waffle House Steaks – A Bluegrass Tribute.” Let’s put that one on. I wish that there was more information, because these are all mostly from, like, the ’90s, and I’m sure there are great ones from the ’50s and ’60s. But I’ve never found older ones. I’ve always found more or less contemporary ones. I wanted to [collect] them for years. I would ask people, “Do you have any of those singles from the Waffle House?” I’d look for them everywhere, and finally I started finding about ten years ago. Just, like, at secondhand stores and stuff. Never at record stores. Just, like, antique stores and stuff. 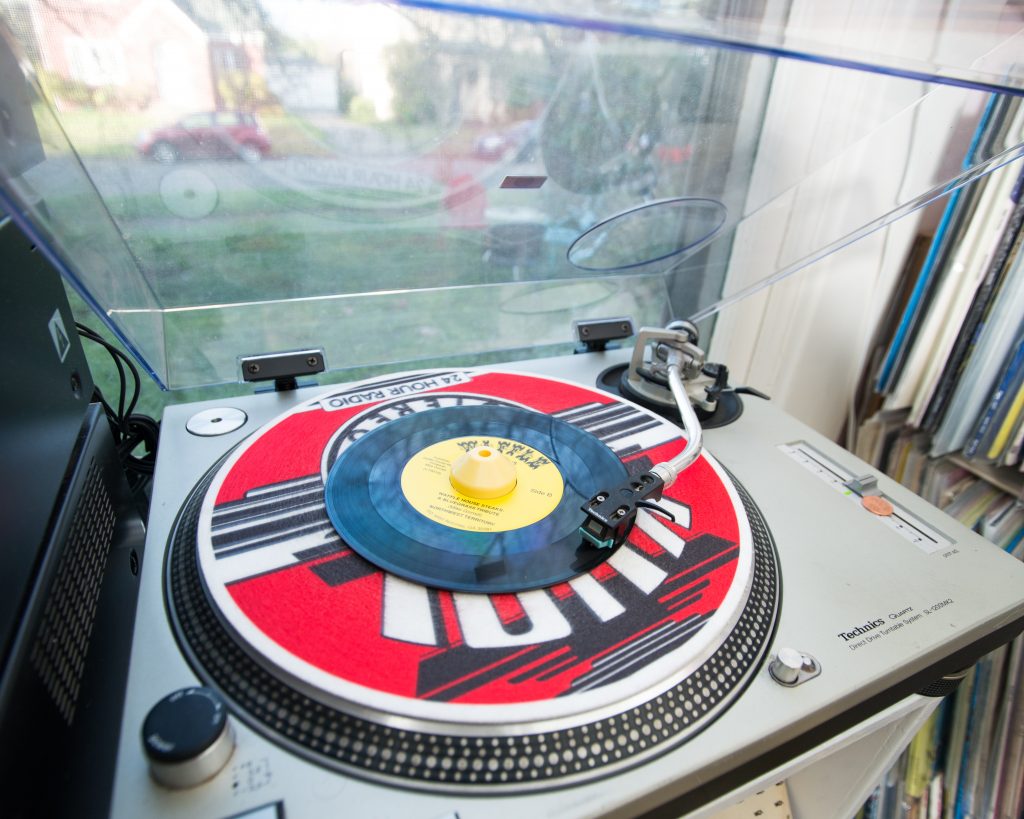 We should hear “Waffle House Hash Browns (I Love You).” See, what he just said: you get your hash browns with different things in them, and on the menu it’s diced, smothered, scattered… (singing along) See, scattered is like peppers, smothered is with cheese, diced is with tomatoes, or whatever. So then the waitress goes, “Hash browns, scattered and smothered!” And you’re like, “Whaaat?” 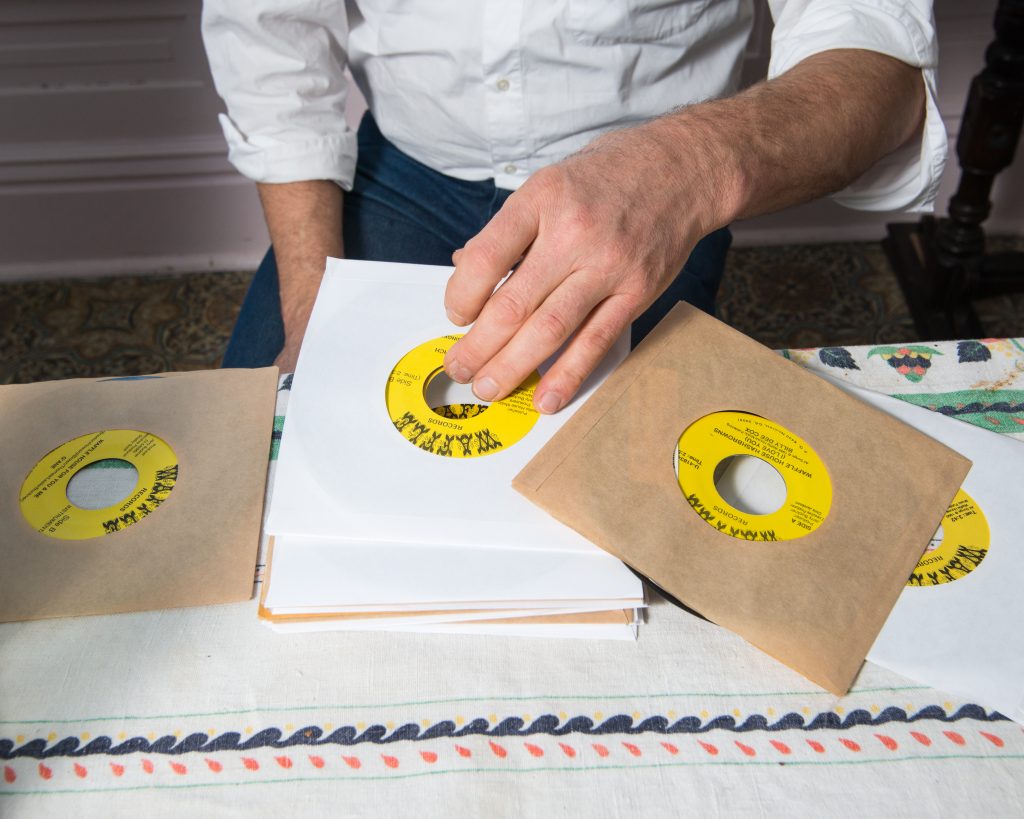 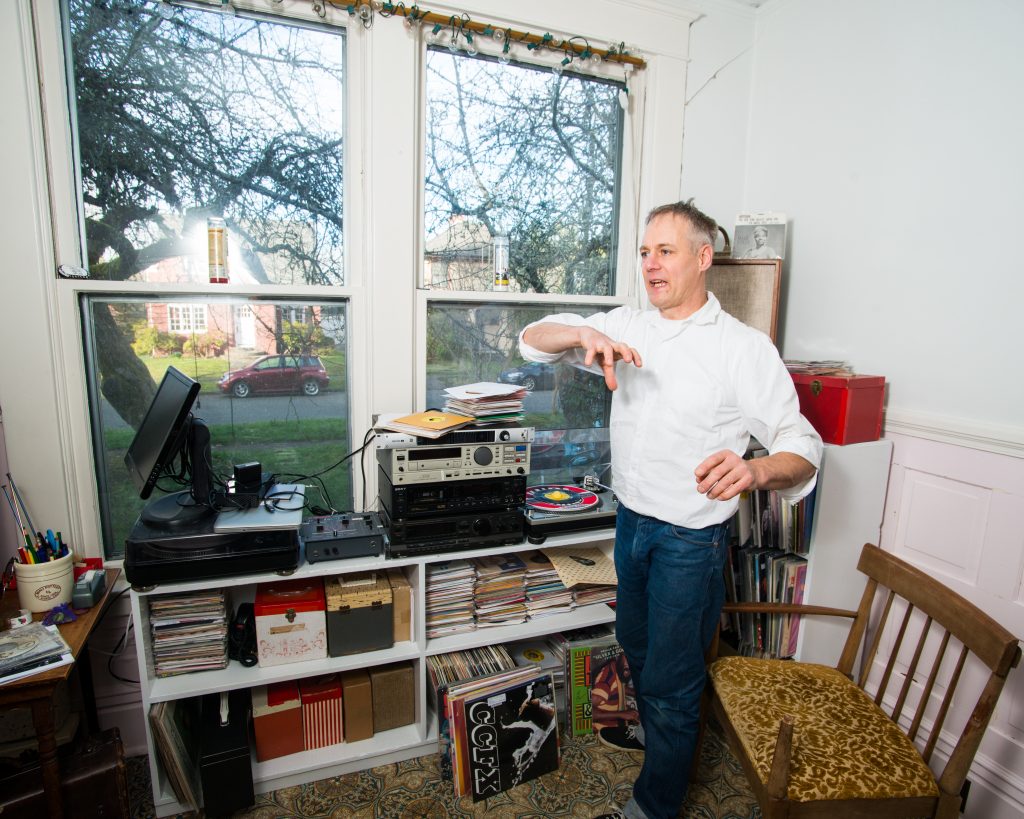 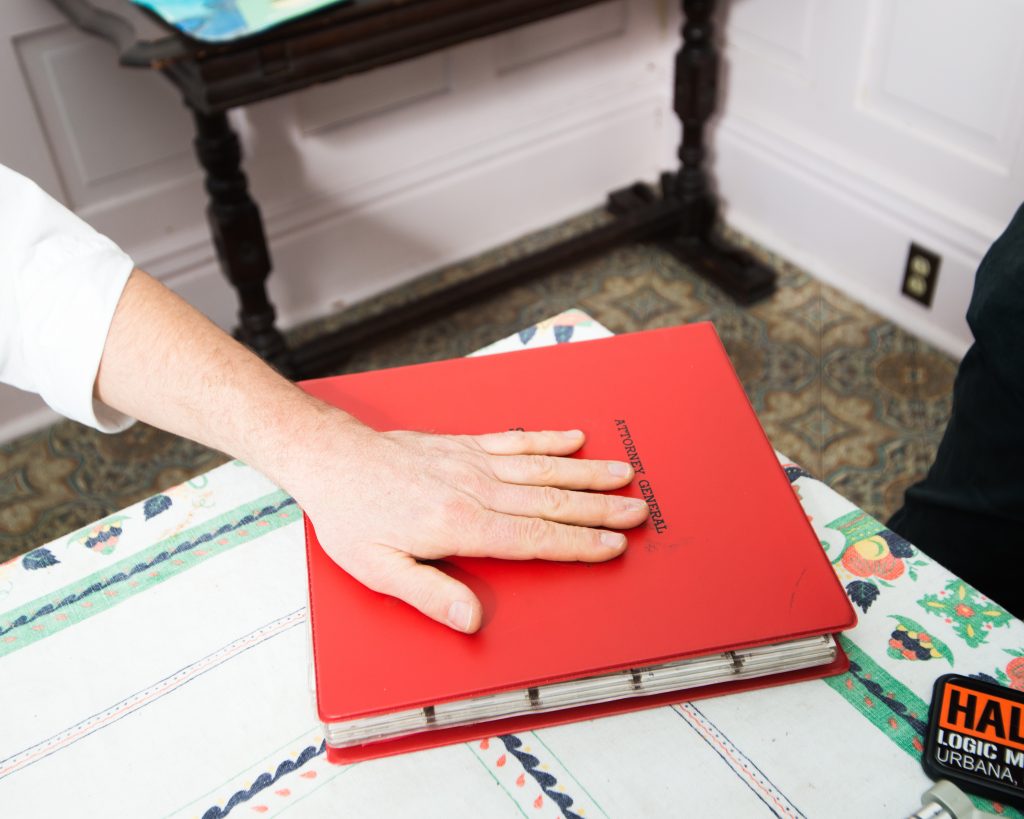 So, that’s some Waffle House stuff. And then I can show you these guitar picks. So, there’s this guy named Ernie and he fixes guitars and he builds guitars. He’s just a guitar person. I was hanging out with Dale Crover, from, y’know, The Melvins, he’s the drummer in The Melvins—and Ernie, at that time, he was, I can’t remember, I think maybe he was housesitting for Krist Novoselic or something like that, and—I don’t know why—we had to go over and maybe get something from Ernine, like he was fixing something for Dale—he and Dale were friends—and, anyway, we went over there and he showed me his guitar pick collection that he had that was [in a binder] like this; he had picks and he’d put them in—if you collect coins, that’s what these little frames are for, they’re for putting your coins in, and these plastic pages you get out at the coin shop, and so he would put his picks in these little things, and he would get people to sign the picks. And I thought, “What a great idea! I wish I’d started doing that when I was a teenager!” Because he’d started doing it when he was a teenager. And, so, I decided I was going to do that. This was probably in ’92, because that’s when I started doing it. 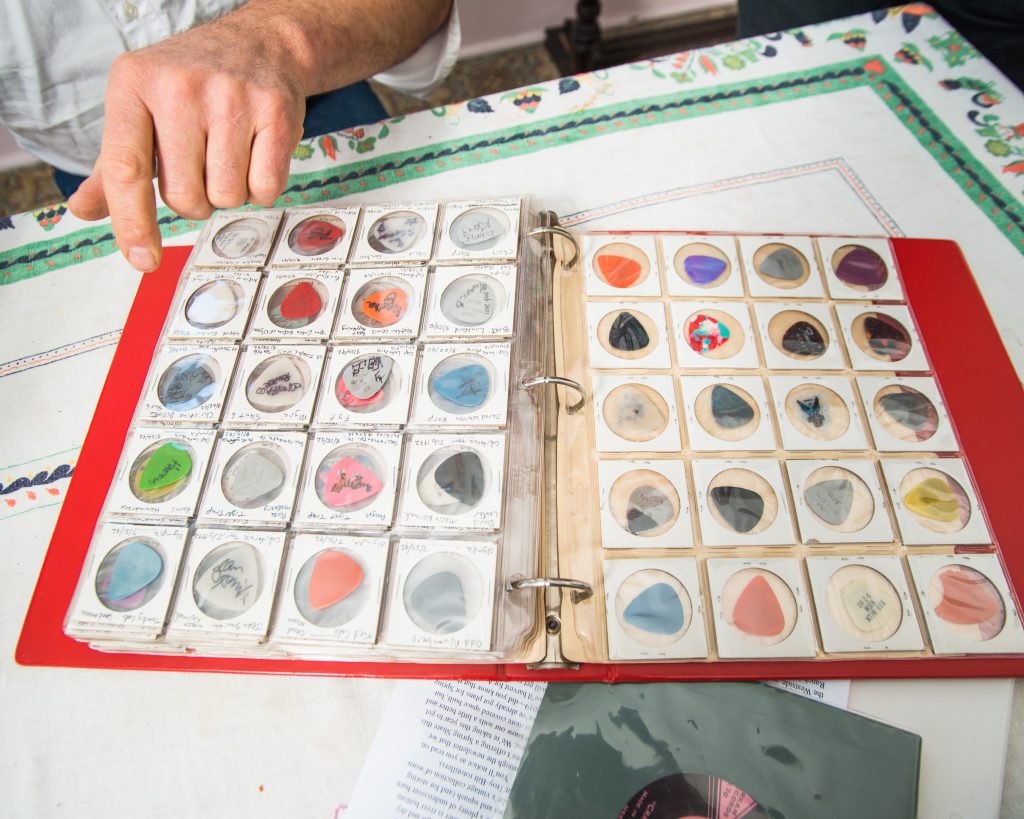 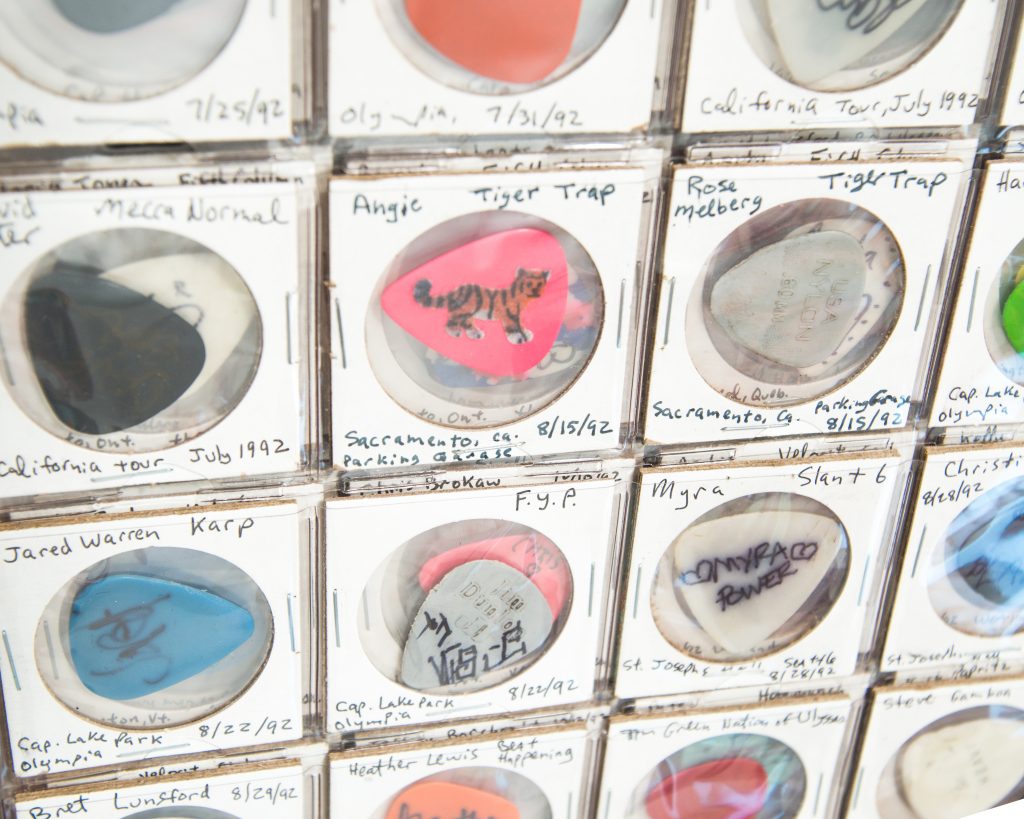 So, I started asking everybody to give me a pick. So, this first batch was… This is me, Beat Happening. This one is KARP. Some local bands; John Quittner, and Nathan from No Reason, Gilly from Calamity Jane, Justin Trosper—and this one is from a little band that he was briefly in called Satellite-1. Nikki McClure. Rebecca Gates. Tae Won Yu. Dale Crover. Jonathan Richman—now, he didn’t wanna give me his pick. He’s like, “Why do you want it? What do you want it for?” And I’m like, “Because.” And I finally convinced him to give it to me, but it was not easy. And then Tom Price. That’s a cool one. So, anyway, I started collecting them. Fred Cole; he didn’t sign that one, though. I might have a couple of Fred Cole’s. Oh, there’s Toody. But I didn’t get them to sign them, I don’t remember why. Just bands that I saw, that I knew. Heavens to Betsy. Corin Tucker. Reid Diamond—he was in Shadowy Men. He passed away a few years ago. Unrest. Rose [Melberg]. 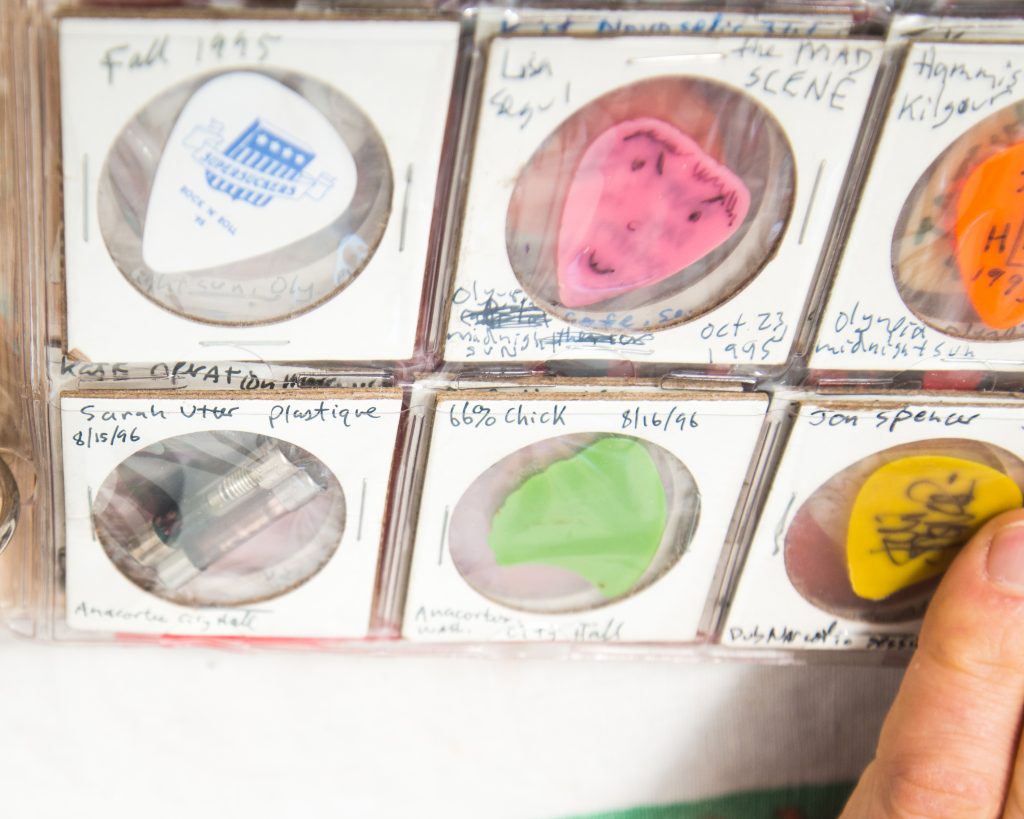 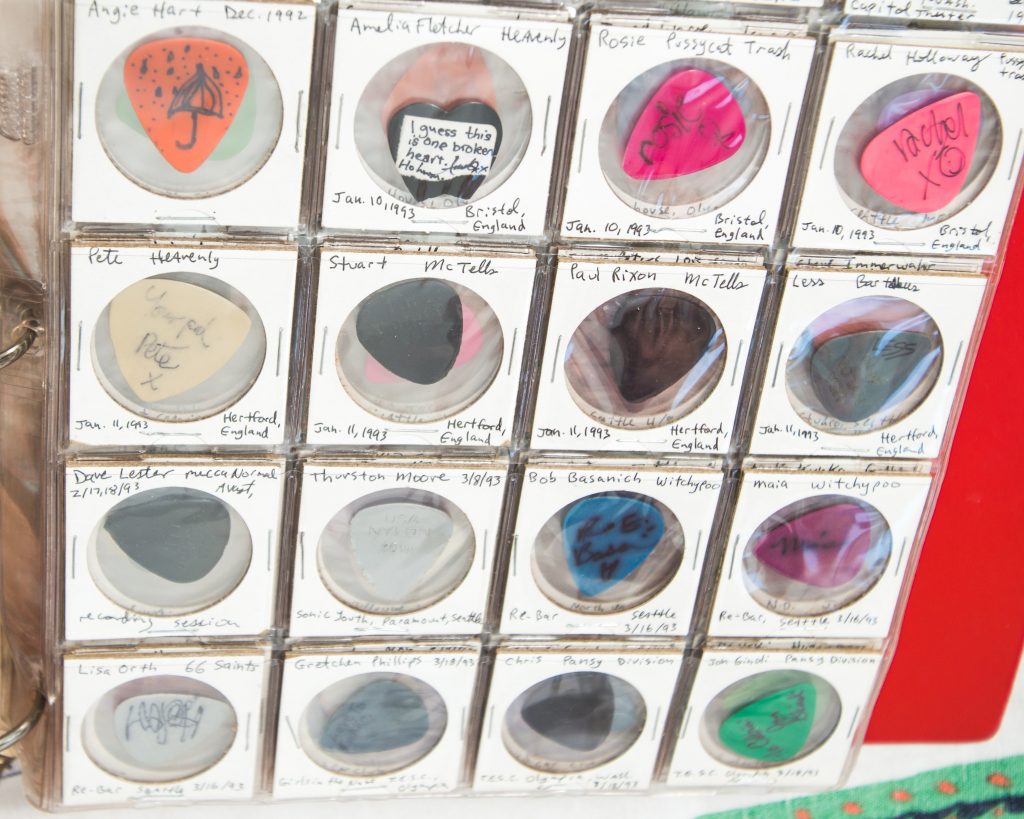 You know, but, after a couple years of doing this—it might’ve only been a year—I sort of got a little tired of asking people for a pick, but I wish I had kept going, but, what can you do. So, this is Sarah Utter, I didn’t get her guitar pick, but she blew two fuses at that show, so instead of her guitar pick I just got her blown fuses. Hamish [Kilgour], from, he was in The Clean, but he played Olympia in a band called The Mad Scene. Jon Spencer. Supersuckers, they were a band from Seattle; I don’t think I saw them, I think someone just gave me that pick. I don’t remember, it’s hard to keep track. See, this is my Supersuckers pick that I used, and I was like, “These picks aren’t that good.” The Supersuckers pick just can’t handle the Calvin Johnson guitar playing. 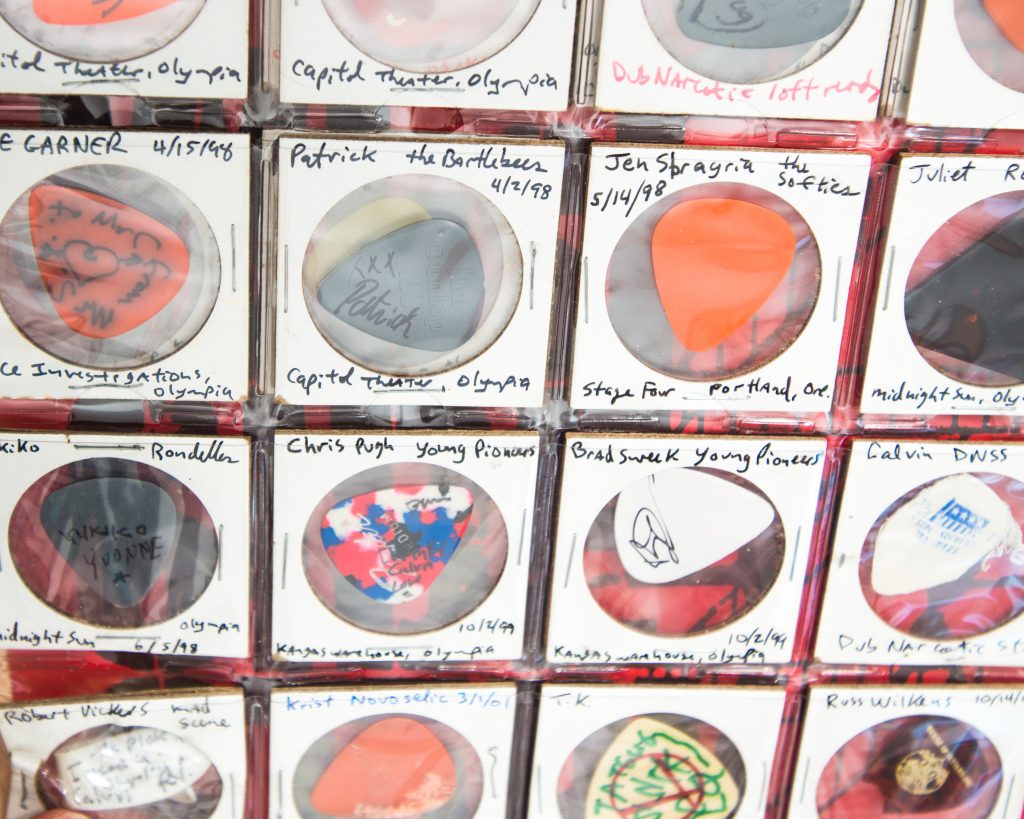 I saw Ernie last summer and I told him about how I got my guitar pick collection, that I was inspired by his collection. And I’d never told him that I had started one until last summer. And he was like, “Man, thank you for telling me that, because after you guys left I was so embarrassed that I showed you guys that, I was like, you guys must think I’m the biggest nerd.” And he told me that he had started his collection at the very first concert he ever went to, he got a pick, somehow, and then he just, every time after that he would just get a pick, so he started it when he was like 16 or something, and it was some huge band, I don’t know who it was, like, Def Leppard or something like that. I remember being very impressed. He had all kinds of people, like Ted Nugent and stuff like that. I have Jonathan Richman, but not Ted Nugent. Justin Trosper, but not Def Leppard. I do have Fred Cole, though, that’s pretty good. 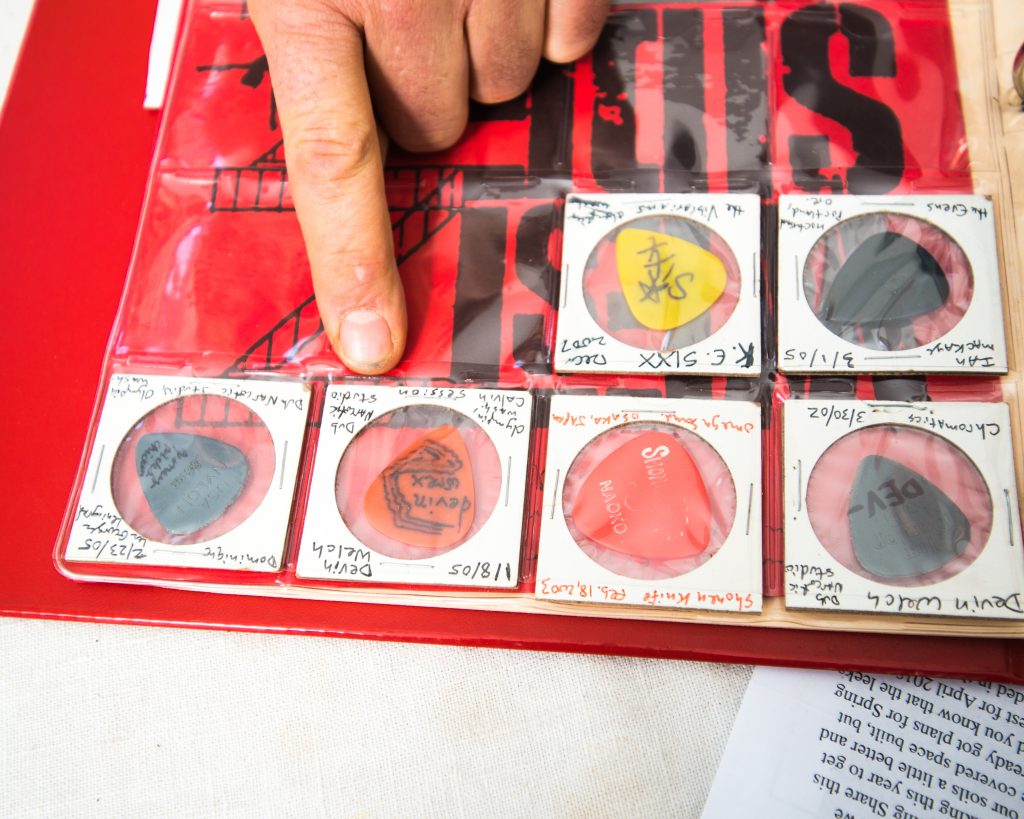 We are a clubhouse of collectors, obsessives, and organized hoarders. Souvenir Club is an expedition into the cluttered world of collecting and curated accumulation. We want to sniff out the most passionate and single-minded people we can, wherever they lurk. Our goal is to humanize and document the home-museums of America, one story at a time.

No images found!
Try some other hashtag or username